It sounds like something that probably aired on Creature Feature that I wasn’t allowed to watch as a kid… sorry Mom and Dad, I watched it anyway, and you were right… it did give me nightmares… and one of them turned into my present reality… we became POD people. And as scary as that seems, it was probably one of the best decisions that we made when it came to the move. Organization of said PODS, as we discussed, not so much, but we used them to the max. John has mad 3 DÂ visualization skills. He can look at a POD and then look at a random assortment of boxes, bins, and furniture, and see how to make it all fit within. Amazing!

When it came to the unpacking, that’s when I took control. Nothing came into the house that I didn’t first put what I call fuzzy feet, more commonly known as felt pads, onto. I was also very firm thatÂ random pieces of furniture, i.e., pieces that did not yet have a home, were not allowed to enter the house, much to John’s consternation. But what is storage space for, if not to store? John’s approach would have been to pile everything up in the dining room (indefinitely) until we decided where to put each piece (eventually) and that would have landed me in a straight jacketÂ (immediately), and since John will attest to the fact that I am nearly certifiable as it stands now, he acquiesced to my demands…Â Â I mean wishes. I have to admit that I am enjoying living thisÂ rather minimalist life at the moment. It will be interesting to see whether or not that continues as more boxes slowly make their way into the house. Not that I don’t treasure, what I consider to be my special things, the things that I really will pass down to future generations with a senseÂ of joy, but knowing that they are safely tucked away in a box somewhere, and that I don’t have to worry about them, gives me the freedom to live without them.

Thank you for visiting Welcome Home!

Connect with us online 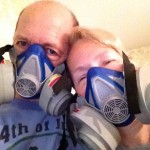 Once upon a time there was a family of five who lived in a roomy four bedroom colonial. One day when the children grew and began to live away from home, the parents said, “This house is too empty when the kids are gone, lets downsize”. This is their story…